I have always believed that my job as a Police Officer was about serving and protecting my community with compassion. Early in my career, I realized many people feel the police are heavy-handed enforcers of the law, devoid of empathy and reliability.  And for many, many years, I was upset with these people. How can they paint us with such a broad brush?

When I began studying mindfulness, I started to understand how complex these relationships really were. I realized my defensive attitude only contributed to the breakdown of these relationships. I noticed that although I had compassion for people, I still saw them as different from me and unknowingly, created an “us and them.” Through my mindfulness practice,  I was able to see the interconnectedness of all people, and protect and serve in a truly authentic way. I became more focused on listening, thinking and acting with “kindness and curiosity” (mindfulness as defined by Dr. Amy Saltzman).

Several years ago, I began a new assignment as a School Resource Officer. I wanted to offer more than police presence; I wanted to help children succeed, and build relationships within my community. However, I also knew I would have to work hard to repair relationships that had already been damaged. Many children had already experienced negative interactions with police through personal experiences, and others absorbed negative impressions of police through their family, friends and/or environment.

With this in mind, I leaped into my new role. The kids noticed my energy and passion, and appeared to be enjoying my presence in their school. I implemented the L.E.A.P. Program, which helped me further connect with students, staff members, teachers, community partners and parents. I felt like I was making a difference and truly helping people!

I learned a lot of lessons in my first year, one of which was that despite my energy and passion, I couldn’t fix everything. When we had an especially challenging student with no family support, the Assistant Principal would say,  “Michelle, you have to remember that you can care about the child, and I can care, but if the family doesn’t care..the tripod will tip over.” I felt defeated, but decided that this was an area for me to lean into more with support as an SRO. I vowed to continue collaborating with families to support them to find ways to stabilize their tripod and empower themselves. In November I had my first tripod repair with a child named “delinquent” and a family named “hopeless.”

Michael was frequently in the Principal’s office. Michael was issued detention after detention and was frequently absent from school. People would say, “there is no hope unless he gets shipped off to military school.” I heard a voice inside my head say the same thing. This student was troubled, and I felt as though nothing I did was working. He was in my L.E.A.P. class, AND I had one-on-one meetings with him when he got into “trouble.”  As hard as I tried to get through to Michael, he remained resistant. 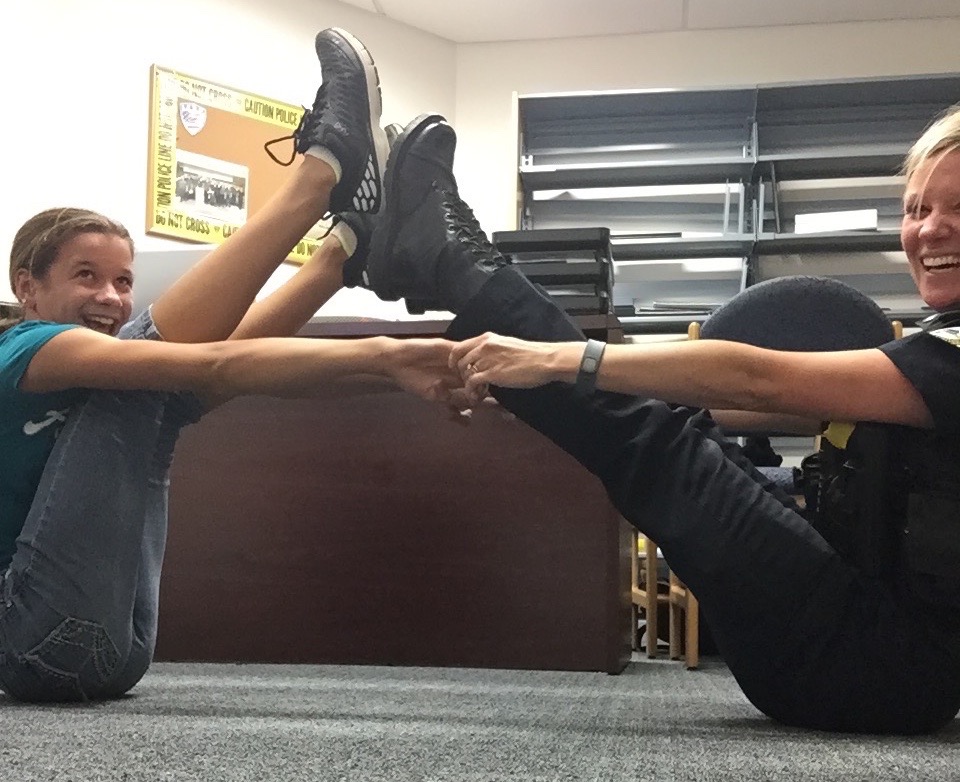 After some time, I realized I was going about this wrong.  I was only showing up when Michael was in trouble. I was trying to befriend him when he was angry and upset. When I looked inside myself, I realized this “befriending” was a bogus way of trying to correct the behavior, or solicit information about what he did wrong. Rightfully so, Michael didn’t trust me. He saw the blue uniform and badge and recalled all of the things his father said about police being dishonest. He saw me as an authority figure and one who would respond with a heavy hand when he stepped out of line. Most importantly, he saw me as I was; trying to be his friend in a way that was not completely genuine.

I decided to think about the goals I set for myself when I began my role as a School Resource Officer; to compassionately protect and serve by investigating issues with kindness and curiosity. I began using my own mindfulness techniques to understand that Michael was not behaving this way towards me because he wanted to make my life miserable (even though sometimes it felt this way). Instead, he was a child whose behavior needed investigating from a place of care and concern, and dare I say, love.

Through reflection, I began to notice Michael consistently lived in both the past and the future. He would say things like, “I knew you would say that,” or “What does it matter,  I always screw up!” Michael had no idea how to live in the present moment. When I met with him, I would often be dwelling on the past and projecting to the future alongside him. Though my intentions were good, I wasn’t helping the situation. I realized I needed to connect with Michael in the present moment, and make an effort to engage with him when he wasn’t in trouble.

Ultimately, Michael and I bonded over our shared difficulties of living in the present (yes, that’s right, even after years of yoga and mindfulness practices, I still have to work every day on being present). I also decided to take an interest in Michael’s life, even though I thought the video games he adored weren’t good for his brain. I had to relate him, but mostly, I had to see him as a child who was in need of an adult that would connect with him in an honest and from-the-heart kind of way.

While Michael still has his behavioral moments, he has a way of rolling with it. He now knows that I won’t reject or depreciate him. I served him with a giant dose of “I’m here for you, unconditionally” and protected him, in the very best way I know how. Our relationship had a ripple effect, in that Michael now sees Police Officers in a different light. He once said, “You know…I used to think cops just wanted to be tough guys and arrest everyone.” We both rejoiced in knowing laughter.

Michelle Palladini is a Detective and School Resource Officer at the Norfolk Police Department in Norfolk, Massachusetts. Michelle has been working in the field of law enforcement since 2004. She graduated Magna Cum Laude from Stonehill College, with a Bachelor of Arts in Criminal Justice.  Michelle believes in the benefits of community-based policing. She frequently offers programs within her community such as women's self-defense classes, public information meetings, safety seminars for senior citizens, and programs for special needs children.  She also founded and facilitates her departments Community Crisis Intervention Team.  Due to her desire to offer more to the children in her community and beyond, she developed the L.E.A.P. Program. L.E.A.P. offers a method for connecting the police, schools and parents as a pathway to children's success in four areas: happiness, health, safety and resilience. Michelle consistently trains School Resource Officers in the L.E.A.P method, offering ways to approach the position mindfully, and with a great deal of compassion for our young people who face so many challenges.  Additionally, Michelle is a children's yoga and mindfulness teacher, trained through Little Flower Yoga. She teaches children and teenagers at the King Philip Middle School and Sacred Tree Yoga in Norfolk. Michelle is the wife of an incredibly supportive husband, and a Mommy to a six-year-old daughter, three amazing bonus children, and a Siberian Husky named Denali.